Skip to content
Is your horse eating his hay too fast? 11 ways make your horse’s hay last longer

Is your horse eating his hay too fast? 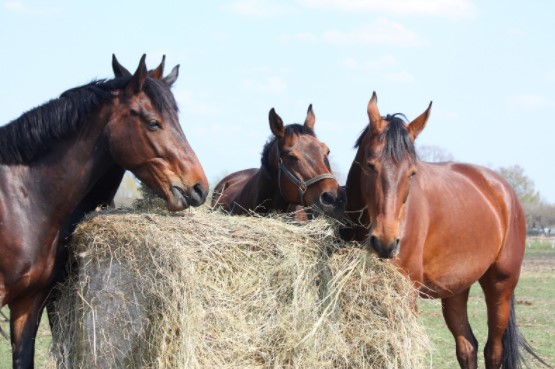 Does your horse scoff down their hay way too quickly? Has your horse always run out of hay? Yes?

This isn’t an uncommon situation. Horse’s tend to wolf down hay in the blink of an eye. It can be frustrating and worrying for owners to think that their horse may be in the stable all night or all day without any hay to keep them occupied.

In this instance, it can often be tempting to provide more hay. Unfortunately, this won’t work for two reasons A) It won’t actually last your horse much longer anyway as they will continue eating the extra and still be without hay for a long period B) You will likely be overfeeding them which can cause weight issues eventually.

So, is it important horse’s don’t eat their hay too fast?

Well, there are some factors you have to consider relating to the horse’s natural lifestyle and genetic makeup:

So how can I stop my horse eating their hay so fast?

There are many ways in which you can try to prevent your horse from eating their hay so quickly. Check out some of these great solutions below!

Little and often can be very helpful in preventing horses from scoffing down their hay so quickly. Rather than provide them with one large haynet why not split this up into multiple hay nets of smaller sizes. This can be a great way of providing them consistent hay throughout the day (maybe not so do-able overnight).

Hay nets are actually quite versatile all in all. A great technique for slowing down feeding is to double up your hay nets. Use one haynet inside another to make it more difficult for the horse to get to the hay. Doubling up the nets can make the access points much smaller for the horse which will essentially slow down feeding.

Trickle feeding nets are a very popular option for horses that eat too quickly and can be very handy for reducing wastage. These types of nets contain very small access holes that encourage your horse to nibble and pluck the hay rather than grabbing and pulling large amounts. It is fair to note that the holes are very tiny on these nets and therefore can become frustrating and cause stress for some horses.

Hay balls work in a similar way to trickle feeding nets. They are designed with smallish holes which limit the horse’s intake of hay at any given time. Hay balls can be used in the stable however are much more ideal for use outdoors such as the field. They also provide your horse with enrichment and paddock entertainment so are a great dual-purpose purchase.

Many owners choose to mix the hay in with good quality straw which really helps to spread out the intake of hay your horse consumes. This method isn’t about reducing the amount of hay your horse receives. The straw helps to bulk out the ration which will take your horse much longer to eat. The good news here is straw is relatively low in calories and is unlikely to cause additional weight gain.

Sometimes the location of your horse’s hay net can make a huge difference in how long it takes your horse to consume. When regular hay nets are tied up against a wall it can be very easy for your horse to consume however have you ever thought about hanging your hay net in the middle of the stable? It is much more difficult for your horse to get at and will therefore last them much longer. This could be frustrating or stressful for some horses but is likely to work food the majority.

Slow feeder hay boxes are a pretty popular choice for slowing down horses that eat too quickly. They are a similar concept to slow feeder hay nets. They contain small holes in the top which essentially make it much harder for your horse to get at than feeding from a regular manger. They can be used both in and out of the stable, but unfortunately, unless they are sturdy and well made they can be a potential hazard.

Hay bags can be used both in and out of the stable and I guess you would say are a modern option to the trickle feeder hay net. These bags provide a relatively small section for your horse to pull hay from and if tied up away from a wall or fixed object can slow down feeding significantly. The downside to hay bags is they do not hold much hay at all which means they will need to be filled up more often than regular nets.

Have you ever thought about providing multiple hay locations for your horse? Why not provide a number of small hay nets around the stable so your horse has to move around much more between each one. This can be very helpful for slowing down feeding. You do not need to provide more hay than your horse would normally have, it’s all about spreading out what they do have.

Soaking hay can be very beneficial for some horse’s eating habits and can really slow down the speed of consumption. Although wet hay is generally softer, you could find that some horses seem to eat it more slowly. There is also the added bonus of keeping your horse more hydrated. Never soak hay for more than 12 hours and always make sure you change the soaking water daily as it will go rancid.

Providing your horse with some additional enrichment, particularly in their stable can be a great tool for slowing down how quickly your horse eats its hay. There are a variety of boredom busters that can be placed into your horses’ stable, providing them with extra enrichment and tasty snacks at the same time. Try hanging vegetables such as swedes, carrots or apples on a string in your horses stable. It will provide hours of fun and keep them well occupied. They may even temporarily forget their hay is even there!

Toggle Sliding Bar Area
We use cookies to ensure that we give you the best experience on our website. If you continue to use this site we will assume that you are happy with it.OkPrivacy policy
Go to Top